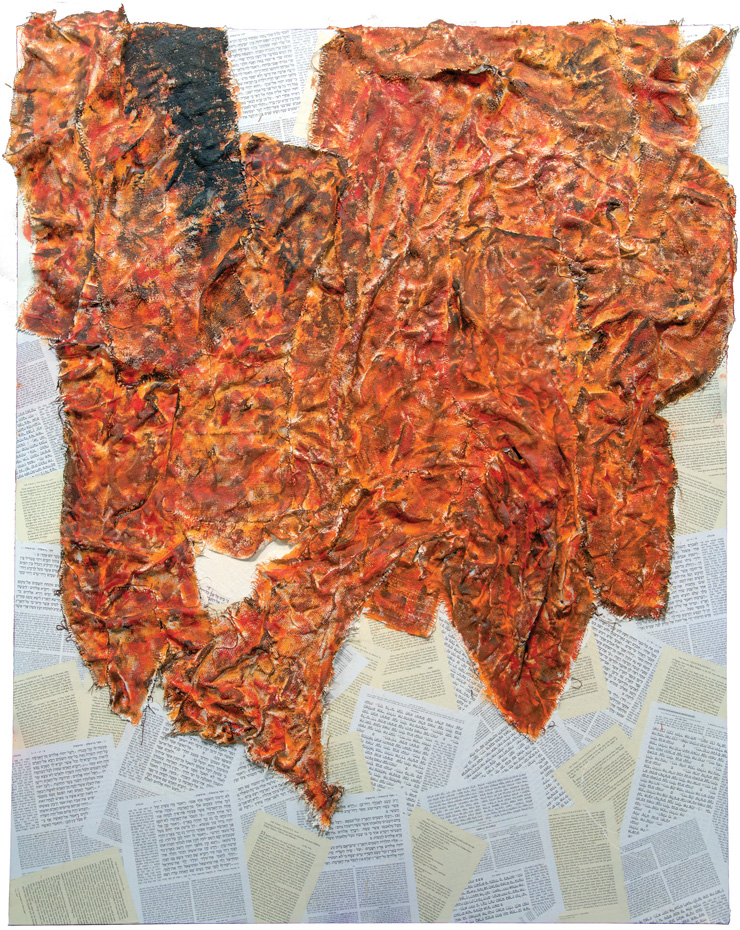 For Veil of Ignorance, Mousa has created a new series of mixed-media paintings made of the pages of the Bible, Koran and Torah, which illustrates his disenfranchisement with religion. Mousa notes that the three religions all share the same God, and profess to preach tolerance and mutual respect. Yet “they’re more notable today for their mutual antagonism, ill will, and violent acts,” Mousa said of three faiths.

Veil of Ignorance continues artist’s theme of Invisible Burka started years ago and developing for a number of years. The Invisible Burka refers to artist’s personal struggles and life as a gay man, his religion and society’s expectations of who he should be. “I wore this invisible Burka for most of my life and I want to share this life experience with others. Most of us have had to wear an invisible burka of some sort in order to please others. We felt shame, fear, guilt and peer pressure so we conformed. This is about the lifting of that invisible Burka and becoming free from all expectations and pressures that effect us on a daily basis,” states Nabil Mousa.

Mousa draws from a well of inspiration bearing witness to his cultural heritage. Whether working with painting or mixed-media installation, his work deeply expresses his notions of justice and civil rights. As a result, many of his exhibitions are political, educational, thought-provoking, and sometimes controversial.

Nabil Mousa (b. 1966) incorporates the cultural tensions of both countries into his practice, combining them with his own personal convictions. While earlier examples of his work strictly appropriate Middle Eastern and Mediterranean design motifs, more recent examples relax them, allowing for looser representations that symbolize his new life in the United States. In this way, politics is omnipresent in Mousa’s work. This is not to say, however, that personal struggle is in any way diminished. Rather, Mousa’s vested interest in all aspects of life has been the common thread in all of his works. Raised in a conservative Christian household, Mousa is always pitting socio-religious oppression with self-realization – from his earliest works examining the Muslim niqab to his more recent series inviting Christians, Jews, and Muslims alike to come together in creative reflection over 9/11. Using color in unexpected ways, Mousa lets intuition and affect guide his oeuvre. His work is always framed by hope for greater equality, no matter how naïve or impossible that might seem in the face of ever-challenging political and religious difference.